The Toledo Animal Shelter (renamed Toledo Animal Rescue in 2018) was “born” as the result of a caring well-known civic leader, Mrs. Ben Johnson, who in 1921 - as the story goes, “on a cold and stormy night” (don’t all good stories begin that way?) was on her way with her husband to the Opera when they came across a small collie dog huddled in a doorway, undernourished and shivering. They stopped, wrapped the dog in Mrs. Johnson’s coat and took it home. And that was just the beginning...

Mrs. Johnson was not only a friend and champion of homeless animals but was also a very prominent woman in the Toledo community. She was a member of many organizations including The Toledo Women’s Club, the Ursula Wolcott Chapter of the NSDAR. The American Association of University Women, and the League of Women Voters. And those were just a few of her activities. She was also an avid horse lover, having ridden all her life; and was instrumental in stopping the mistreatment of older horses that were used to pull wagons on the streets of Toledo and in finding pasture land for “retired” horses.

As Mrs. Johnson, along with her friends, saw a need in our community for a place to care for stray animals until suitable homes could be found for them, they began to take in abandoned dogs, keeping them in their homes. 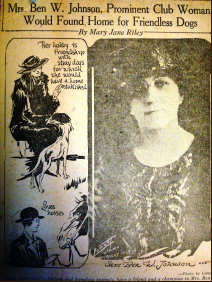 Word of the activities grew, and the local newspapers began to write articles about the Shelter’s plight; and in 1927, the paper sponsored a fund-raising effort. Money began to come in from all over northwest Ohio, and even from celebrities. It helped that the newspaper listed the names of the contributors and the amount of their contribution.

The first Citizen to respond to this fund-raiser was T. J. Tripp of Tripp Sign Co. Later Mr. C. K. Wilson of Wilson Chemical was the first to put the newly formed Shelter into his will with a bequest of $25,000, which in those days was quite a nice amount. In March of 1927, the Shelter was incorporated under the laws of the State of Ohio and had temporary quarters on Hobart Street. In 1928 they leased a facility on Dorr Street and the first manager was A. B. LaFever, a retired circus animal trainer. In December of 1930, TASA moved to the present grounds off Byrne Road and the Chicago Pike.

When the Shelter opened in January of 1931 at the new location, there was quite a celebration. One of the Shelter’s most famous supporters was Irene Castle McLaughlin, a former dancer and musical comedy performer, who came to Toledo to attend the opening. Mrs. McLaughlin had begun the well-known animal shelter in Chicago, near her home, called “Orphans of the Storm”, where she helped in the care and tending herself. She was known as perhaps the country’s best “friend of the strays.” Mrs. McLaughlin is pictured in a newspaper holding a little mongrel pup, a resident of the shelter, named “Little Orphan Annie”. She was said to comment, “I love mongrels. I don’t care in the least what breed - or how many breeds - a dog happens to be just as long as he’s a thoroughgoing mongrel”. Mrs. Johnson remarked that day, “We opened in a chicken coop with seven dogs. We have come a long way.” A long way indeed, as during the year of 1931, the Shelter placed 1364 dogs and 150 cats in loving homes.

The newspaper coverage of the Shelter and its activities was endless, with headlines and pictures, and was a very visible part of the community. Many well-known people were associated with it, including Mme. Georges Henri Riviere, who traveled the world with her little dog, Lil, adopted from the Shelter. In 1933, when a tea was held for the Shelter, famous Coloratura, Lily Pons, sent a handkerchief, hand embroidered with the name “Lily” to be given as an award. Mrs. Ponds was a great animal lover and had recently visited Toledo with the Towne Hall series. By this time the membership rolls numbered approximately 1500, including the names of Toledo’s most prominent citizens, among them Mayor Addison Thacher and County Commissioners.

Mayor Thacher, an animal lover, came to the aid of the Shelter in 1933 when he appealed to State Examiner Ralph Gillespie to make the Shelter a branch of the Pound. This would allow the Shelter to take adoptable dogs from the Pound without having to pay for their licenses. The Shelter could then find homes for the dogs, and the new owner would pay the fee.

Of course, not everything was smooth sailing. As with any group, the shelter had its detractors and its incidents. In 1934, some of the residents of the Shelter’s neighborhood circulated a petition asking that the Shelter be relocated, as they said the barking dogs disturbed their sleep. They didn’t get anywhere with that legally as the Shelter was privately run, and the matter was not pursued further. However, there was a suspicious grass fire following the announcement, which was put out with no damage.

The Shelter held it’s first “rummage sale” to raise funds in 1927, and in the years following sponsored many prominent events, including style shows - two outstanding ones - “Putting-On-The Dog”, which included pets in the latest “doggy” fashions and “Salute to Glass” in conjunction with the American Institute of Interior Designers”. These were but two of numerous outstanding events put on by the Shelter’s Auxiliary over many successful years, including 2009‘s Fashion Review “IT’S SHOWTIME”, to be followed by 2010’s “ A WALK DOWN FIFTH AVENUE”, shared with Assistance Dogs of America.

Fire destroyed the Shelter in February 1973. Most of the animals survived and were housed next door at our Assistant Manager’s home and in the Meeting House until the Shelter could be rebuilt and rededicated on November 18, 1973. Dr. Fred Hartman was chairman of the reconstruction. This was during the Presidency of Hugh Hutchinson, who served as President of the Shelter for over twenty-five years.

Many of Toledo’s prominent citizens, such as Geralda Pheatt Hoffman, the owner of a designer clothing shop, were great promoters of the Shelter. Geralda dearly loved animals and diligently worked to bring in new members for the Animal Shelter. It is said that it was difficult for her customers to leave the shop without taking out some form of membership in the Shelter. She also raised thousands of dollars to help with the financing of the reconstruction project.

The Shelter has been blessed over these years by the hard work and dedication of its managers - Ray Baer, who became Manager in 1952, and passed away in 2001; and Wanda Curtis, who joined the Shelter in 1961 and served as Manager after Ray’s death. 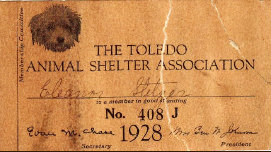 The Women’s Auxiliary was formed in 1948 by Mrs. Frank Segur, and elected Mrs. Lulu Burkhart President. It was reorganized in 1963 with Mrs. Carl (Peg) Werner as President. In 1969 the Auxiliary held its first “barn sale” which was the start of the Annual Flea Market and held on the grounds. The Auxiliary has actively raised funds for projects over the years, and in 1996 the “Meeting House” on the grounds was renovated and dedicated to Mrs. John (Virginia) Hankison who served as Auxiliary President for over 25 years.

The most exciting change as of 2004 was the construction of a beautiful state-of-the-art building on the property, which will ensure the care of our animals for many years to come.

In 2006 the Shelter entered a “new era”. For the first time in its history, an Executive Director, Helen F. Bensch, was hired to oversee the day-to-day operations of the Shelter. The staff has been enlarged, and outreach into the community is being pursued on every level of animal care and education.

Another aim of the Shelter was realized in 2006, and that is to spay and neuter every animal brought to us before they go to their new home. The surgeries are now performed in the Shelter’s new surgery room. This program has been very successful, and the animals adjust well to the procedure and follow-up care by Shelter staff. In the summer of 2010, a lovely Dog Playground was added to the property. The focus is to socialize our dogs with other dogs and people. The goal is to make these dogs more adoptable and readily placed in “forever” homes.

With the efforts of the Board, volunteers, faithful members, friends, and the community involvement, the Rescue will continue to grow and to fulfill every dream that our founder, Mrs. Johnson, could ever imagine.

It is exciting to see the development and growth and to know that it is only THE BEGINNING...